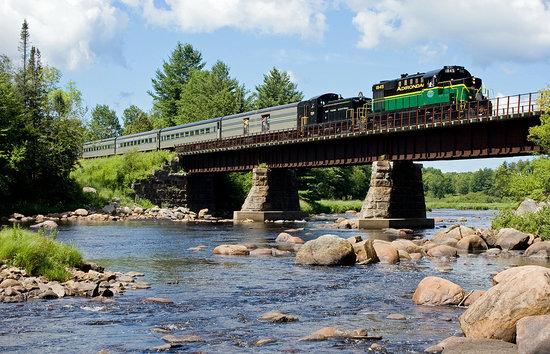 It’s an adventure that begins on the Adirondack Scenic Railroad north into the Wilderness of the Adirondack Park.  You will learn of the Great Camps (summer homes) of the Robber Barons.  You will enjoy a dinner cruise upon Raquette Lake around which many of these great Camps once stood.  Come enjoy beautiful scenery and colorful history.

Arriving in Utica, NY this afternoon, visit the Sarnac/F.X. Matt Brewery. Did You Know? FX Matt Brewery was the first brewery in the nation to sell a beer at the end of Prohibition in 1933. Tour the FX Matt Brewing company where Saranac beers and soft drinks are created. Learn the history of this legacy brewery and the Matt family’s German heritage. Stop in the 1888 Tavern after the tour for a sample.

This morning after breakfast, depart the Utica’s Union Station for a two hour ride on the Adirondack Scenic Railroad.  Travel through remote forests, past sparkling rivers, ponds and streams into the magnificent beauty of the 6 million acre Adirondack Wilderness.  A one way rail journey, disembark in Thendara, a small town train platform and find our bus waiting.

Next, you will have some free time and lunch on own in the Village of Old Forge.  Stroll Main Street and see many unique gift shops including Old Forge Hardware. This long-standing staple has served as a bustling center of commerce for more than 100 years. Along with hardware, you can shop for clothing, books, fishing and camping gear, furniture, houseware, gourmet foods, kitchen gadgets, cookware and bakeware, yarn and more!  Old Forge is a shopper’s dream filled with woodsy gifts, rustic furniture, locally made goods, and so much more.

This afternoon, tour Great Camp Sagamore. The Adirondack Forest Preserve surrounds the entire 27-building Great Camp Sagamore estate owned by the Alfred Vanderbilt family from 1901-1954.  This masterpiece of Adirondack architecture, was a place where America’s most influential people came to take a break from the clamor of modern life.  Its wood and stone buildings are the vernacular rustic architecture on which our National Park lodges were modeled.

This evening enjoy a Dinner Cruise on Raquette Lake, the Adirondack’s largest natural lake! Enjoy breathtaking views and a four-course meal on the W.W. Durant. At one time, Raquette Lake was the playground of the rich and famous, with such as JP Morgan, Vanderbilt, Huntington, and Carnegie. Home of the Great Camps style of architecture, there are more Great Camps on or near Raquette Lake than anywhere else in the Adirondack Park. (B,D)